Adelaide -Buckland – Ionospheric Heater Ring Continuum -With a Side of Censorship

Well, it seems that BoM is programming further negation software. Or has A.I. begun to further change Australia’s Radar transparency?  The Algorithm and the feedback loop… Not; Happily Ever After — Fin…

Just as there are many methods used globally to keep the Future Weapons Arms Race Covert, here is the negation of the Adelaide – Buckland, Australia return loop. The archive was wiped from 00:30 GMT/UTC through 02:50. So This return to Operations, centered at Buckland, clearly has nothing to see…! Move along these are not the images you seek.

Here, CONUS is run by alphabets above those that front the agenda. The filters continue to become more restricted in their data reports. The lies go unnoticed, continuing a coverup, remaining largely unresearched. They are not systematically investigated or verified, and the Radar Return feeds are ever more negated or wiped in a rapidly growing trend toward Censorship…!

These are some of the culprits of this agenda to negate transparency involving Weather Modification, RF/EMF interfaced testing, and the assaults of Radio Tomography; the synthetic plasmic passage of Waveforms born of Ionospheric Heaters and yes, NEXRAD as well. More on that in the next article on the synchronized testing of VHF – RF/EMF Outbursts which are shown in imagery proving the experiment and showing undeniable clarity of intent. If a return imagery system shows the impact of an IRI source, Scalar testing, – which has gone far beyond the Nevada Proving Grounds – or NEXRAD acting as a HAARP like Heater in its function; a domino effect ensues.

First to go is the progenitor of all U.S. weather radar feeds, NWS. Among the culprits that work to ensure this comes to pass is NOAA, NASA, the U. S. Air Force and Navy, the NSF, and above them there are others. They include Think Tanks, DARPA, the NSSL and DoD; essentially, Technocracy and its minions and useful idiots.

So, this is about two issues. First, Radar censorship in general. Second, what appears to be the shift toward data negation in Australia specifically and how this could mean that The Algorithm has become aware of its negligence in hiding Future Weapons Experimentation upon the populous.

Here are the few images of this recent Adelaide – Buckland Ring assault. These are directly from the varied BoM systems. BoM being the equivalent of the NWS – National Weather Service working CONUS and beyond.

These two frames are what were available on the archived, three day imagery loops. Just the standard image program for this installations presentation of an Ionospheric Heater Ring… It cannot be ruled out that this is the Ring type that this location is used for. 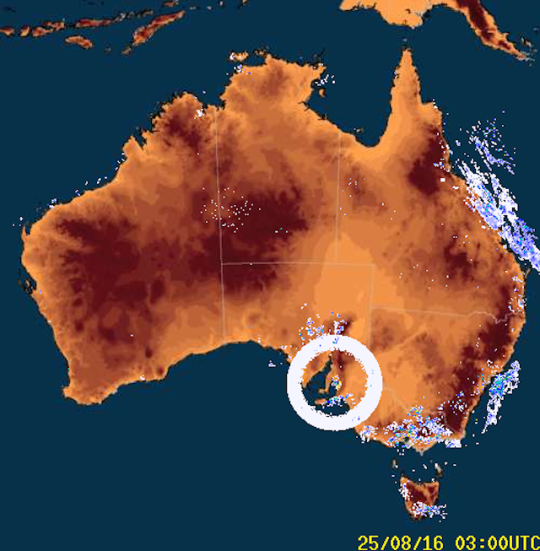 Here is a single site image from the 512km format. The Ring is large enough and imaged as a doughnut, so it does not show in the smaller Range Ring images. It is a given that there exists side-lobe energy, emitted from the Waveform spilling over in directions other than that of the intended beam or beacon. The format showing in a programmed method? A specific Ring type? In the least, the region with the highest radiant frequency is being shown… This is when the censorship began. It jumps from this previously mentioned and imaged time to the two that follow, showing the event. 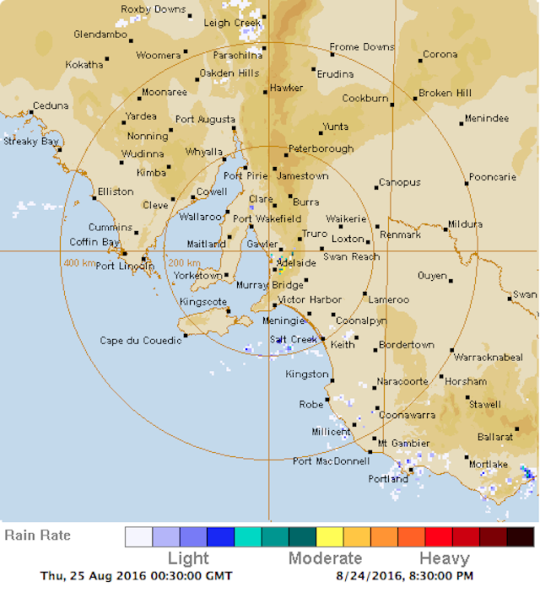 Those are directly from the loop on the 24th August 2016. I have shown these as they had been distributed.

We are faced with an agenda to ends that are not in the interests of life’s betterment. This is a Eugenics Agenda. Those that run these weapons and the R and D actuaries to feed The Algorithm have zero regard for life! Yours, mine, and all that exists on this third stone from the Sun…!

We are being Exterminated – Period…!

Don’t think for an instant this Future Weapons Arms Race, GeoEngineering, BioEngineering, and all of the varied Corporate Agendas are good for you and yours. Not your health. Not your security. Not the future of you and your progeny!

For your consideration…    Survive-All…    Awareness is Preparedness…