As this posts to other sites, you will have to click the quick links to WordPress, to see most of the data.

There are a number of consecutive loops from Norway’s Interfaced Mosaic Radar imagery system. Near the end is a map of Norway Radar installations that play key roles in the data provided. There are some that have been left out, more exist that remain covert. They lack the public access, the transparency a free society deserves.

This data begins with Aerosols captured on the 24th August 2016. It then moves on to events from the 25th. All but the last loop run on 15 minute intervals. There is no Timestamp provided, so I will insert them where possible. The loops have been left short so that they may be viewed in a larger format.

At the end is the Heater registry from the archives. It is from the 8th July 2016, and appears to be Northwest of Tromsø, Norway – EISCAT – registering center at the Hammerfest installation.

Here are the aerosols starting late on the 24th of August…  These are from the last seven and one half hours, local time, on the 24th. They are in the 15 minute loop format. Now, the images begin every 15 minutes from the 24th August ‘16. 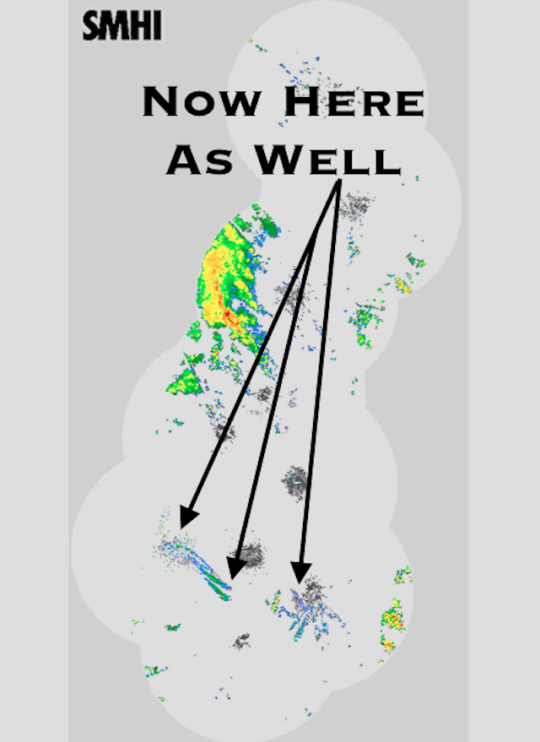 This is the three hour format which runs on a five minute interval loop…  Here is 1835 – 1920 in that five minute imagery format. Oslo, in the southeast reveals the covert operations. Also present, is the coloration linked to electromagnetic induction. As the atmosphere becomes a highly conductive layer where it is worked, or as the toxic metals have become fallout and pass through the Radar Outbursts and generic functions used in imagery, they register. There are software programs to negate straight line images, thus it is rare to find and see this agenda at work. I’m betting someone in Norway has images from the last few days of Aerosolization. Feel free to share them, they will be added to this data and a byline added.

This is the mentioned map of Norway’s Interfaced, public-ally available, transparent to a degree, with some of the installations annotated… 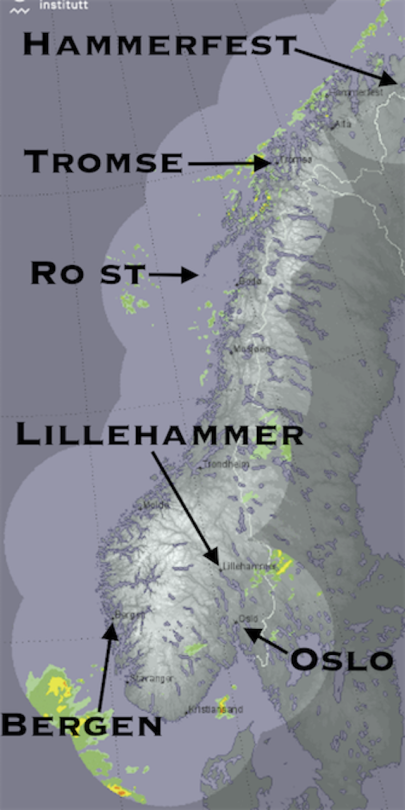 Last is the Ionospheric Heater event which was archived on the 8th July 2016. The better part of this, likely Hammerfest centered impact, was wiped from the data stream. This is a part of a longer run Operation. This is in the fifteen minute format return imagery. The Extremely High RF is off of the charts in the regions of white within the magenta, red, and surrounding regions. The color is not on their legend. This would be said to come under the umbrella label of HAARP, now IRI. For the most part I will continue to shift the label paradigm to the Ionospheric Heater Label. It covers these Future Weapons in the Global Arms Race Technology far better than enclosing it in the singular site name. That, one which is no longer in use. HAARP exists and is operational under a new title. The hundreds of Directed Energy Weapons – DEW – demand a fluid change in their label to continue to cover their evolution as they begin to become operational; their potentials geometrically escalating. This is a global Technocratic agenda. It is the next form of weaponry that mankind has developed and it continues the actuarial data feed to the Algorithm which is now running in a feedback loop. The output of operational parameters are changed by unknown aspects of the Technology. Returns show Unknowns that should not be present. A.I. continues its move toward its view of perfection.

To it, perfection is that which last an end point. Life is imperfect, it ends! The continued search for eternal life as it sees it will continue at our expense.

We are being Exterminated…!

And that is not the only method employed by The Powers That Be. Nor is it the only one which has gone beyond their control. Aerosols being among the Geo- Bioengineering operations as well. Researching Arctic Methane Release will show you another operational failure. As will the Ozone Negation Eugenics Agenda. More on all of these to come.