Why Bernie Sanders Plans To Vote for Hillary Clinton

After ALL of the Rhetoric the Truth from this Minion Sellout Mouthpiece is Admitted…! – ?

From the Atlantic on MSNBC Sanders Interview…

Bernie Sanders plans to vote for Hillary Clinton in the U.S. presidential election.

In an interview on MSNBC’s Morning Joe on Friday, the Vermont senator said – yes – without hesitation when asked if he would vote for Clinton, the Democratic Party’s presumptive nominee, in November.

Sanders Lied to His Backers! 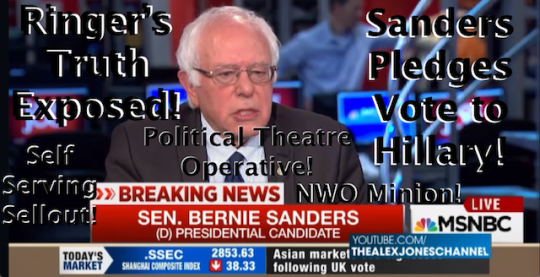 The people of the United Kingdom have exercised the sacred right of all free peoples. They have declared their independence from the European Union and have voted to reassert control over their own politics, borders and economy. A Trump Administration pledges to strengthen our ties with a free and independent Britain, deepening our bonds in commerce, culture and mutual defense. The whole world is more peaceful and stable when our two countries – and our two peoples – are united together, as they will be under a Trump Administration.

Come November, the American people will have the chance to re-declare their independence. Americans will have a chance to vote for trade, immigration and foreign policies that put our citizens first.

They will have the chance to reject today’s rule by the global elite,

and to embrace real change that delivers a government of, by and for the people. I hope America is watching, it will soon be time to believe in America again.

Political Theatre Continues. Sitting back, watching the show… If a person is not an Orator, if a TelePrompter script is needed, they do not think for themselves. Nor do they express their own critical thoughts. As such they have NO PLACE sitting in the Executive Seat!  As such, they are aligned with The Money Powers, living in a delusional alliance! As such, they are corrupt! They are Sociopaths! They are Psychopaths! They fundamentally are enemies of Life!

Just how controlled is Clinton. Enough to read every single thing from her nasty teleprompter, included the word sigh. After sighing.