Here is an interesting event which has been addressed in the past. This is Port Hedland, Australia with the thin ring image on the West coast.  This is from the 30th May 2016. 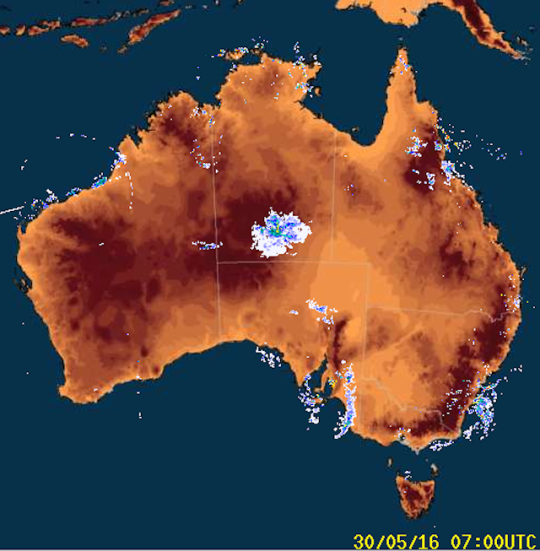 Next are two frames from Mackay, Australia. They are dated the 31st May 2016. Several years ago this type of Wedge shape was seen frequently on U.S. Radar Returns. They where often able to be searched for confirmation through other sites with their varied data processing systems used in imagery. This would be the way to confirm wether it is an Outburst or an allout IRI/HAARP Event that is registering at a given location. They have gone the way of the filtered data that is now released for public usage. Given the size, the station function level, and the single TimeStamp return, I would say that this is from an Ionospheric heater. The lack of a full Ring image could be due to many imagery issues. Most illustrations of these synthetic plasmic impacts show a corkscrew like drilling motion of the Beacon. This capture could be timed in such a manor that that is what we are seeing. The brevity tells us that this is a Jump Point Impact. It strikes, then having been captured, it is sent on its continued triangulation end point. 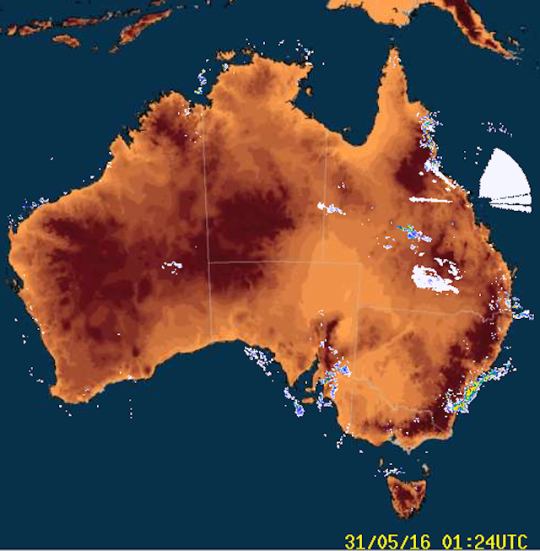 This is from single site imagery from Mackay… There is the Legend which shows white as the lightest of rains. Personally, I have never witnessed clouds that form in this manner.

Here are some of the Links to research Australian Radar in real time and from archives. Real Time is a relative notion. It is not unlike the delay used in broadcast feeds. Close.

Those were the only two images which were in this 24 hour loop. There are at least four basic sites -they are linked in other articles from Australia. This is from Weather Online at:  http://www.weatheronline.co.uk/cgi-app/radar?CONT=aupa&CREG=aust&LTYP=tag&LANG=en&STRUCTUR=_&W=0&L=0&SLP=0&ROAD=0&CITY=&LF=0&SUM=0&LOOP=1

Now, that will get you right to the running 24 hour loop. You will see in the lower right that there is an archive that goes back three days. Here is The Australian Government site. It only images at 42 minutes after the hour and runs four image loops.
http://www.bom.gov.au/products/national_radar_sat.loop.shtml

Next is Elders Weather -dot -com they run two hour loops max. You have to change the setting below the image from the 30 minute setting to get more data.
http://www.eldersweather.com.au/radar/

Then, there is a good site which runs, again you have to use the settings, up to three hour lops; again at ten minute intervals.  WeatherZone Radar...
http://www.weatherzone.com.au/radar

If you are really lucky, you can get data from The Weather Underground -Australia. They have settings to give you ten rather than six images. They run on 6, 8, and 10 minute loops depending…
https://www.wunderground.com/weather-radar/australia

If you want more, these will link you through regions and to single site imagery. If you pick single site, click the 512 km setting to back out to the farthest range ring of the installations capacity. Weather Online, the first link, will give you imagery from between the current running loop. Start selecting times down the list and picking the loop lengths. I generally hit 24 hours. That site links to nations around the world. With some time and patience, you will get returns from different locals.
There are new and different results that come up with each search. Free Online Australian Radar -is to Occam’s Razor… You can add specific locations and get different results. There are about 3 dozen links in my Bookmarks. They came from the above. It may take time, but you will get deeper and closer as you search each site.